A study was published in the April 2016 edition of the American Journal of Cardiology based on analysis of the HeartSmart database and the PowerPoint summary of the results. We thought you’d find these results of particular interest.

You may also purchase the full study: Carotid Plaque Characterization, Stenosis, and Intima-Media Thickness According to Age and Gender in a Large Registry Cohort

Also included at right is a link to our Clinical Overview (updated 8/16). This is a good document for detailing the benefits of the process.

In 2013 a study was published by Amy L Doneen and Bradley F. Bale:

Undetected cardiovascular disease is the greatest risk facing your patients today. In their paper published in “Postgraduate Medicine,” Amy Doneen and Dr. Bradley Bale show why “it is imperative to go beyond the limitations of traditional risk factor paradigms by directly evaluating the presence or absence of vascular disease” and how carotid IMT (CIMT) testing can be used for risk classification and assessing therapeutic efficacy.
“Cardiovascular disease is present in in approximately one-third of U.S. adults” according to a report by the American Heart Association. “The presence of an atheroma is an absolute predictor for the potential of an atherothrombotic event to occur” and that “the degree of atherosclerosis (assessed by carotid-intima media thickness [CIMT]) in low-risk, asymptomatic patients was strongly correlated with the 10-year incidence of CV events.”
“The ability of CIMT testing to identify and quantify atherosclerotic disease has led to the adoption of CIMT as a surrogate endpoint in clinical trials.” They point out that it is a “safe, inexpensive and inexpensive method for evaluating CV risk” and that its wider use “may herald changes in the paradigm for CVD diagnosis and treatment.”
View their report here, with permission by the authors

A gift from HeartSmartIMTplus – Take Heart – a guide to preventing heart attacks and reversing cardiovascular disease. 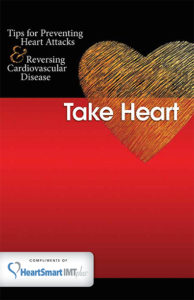 old joke that goes, “I saw my doctor the other day. He said the only thing on my body that wasn’t soft were my arteries.”

Unfortunately, this is often close to the truth! Jim was 41 years old and well on his way to a heart attack. He had beginning stages of heart disease and didn’t know it. More importantly, he was deceiving himself about his risk because he believed he was making all of the right lifestyle choices with diet and exercise. He was wrong!

Many people believe that heart disease is an inevitable part of aging, which is true to a certain extent. We all develop the buildup of fatty deposits and cellular waste in our cardiovascular systems as we age.
When this buildup becomes excessive, it can lead to a heart attack or stroke.

What many people don’t know is that heart disease is not only preventable— it is reversible.